Wishing you Safety and Health.  Freshness Farms is grateful for the ability to serve you. 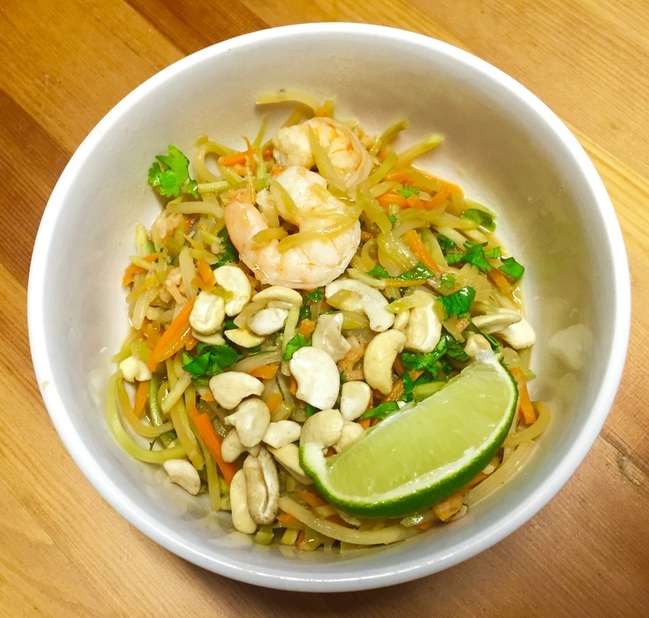 We’ve been given a lot of cilantro lately, and I can only make so much guacamole and garnish so many tacos. I wanted to try to take my cilantro usage in a completely different direction, and I think I’ve found just the thing!

Who doesn’t love a good, hearty Asian-inspired meal? Since I don’t eat noodles, a bit of modification was applied to my meal. I replaced the noodles with shredded zucchini and carrots, but traditional rice noodles can also be used. I had some shrimp in the freezer, but chicken or pork would be great with this as well.

*I chose to use a bag of wild caught shrimp that were already shelled and deveined, for efficiency. You could use raw or frozen shrimp of your choosing.

To start your dish, throw your zucchini and carrots into a wok or large skillet on medium heat. Drizzle the sesame oil over the top, and begin to stir fry the “slaw”. Once it’s broken down a bit (about 3-4 minutes), add in the shrimp. Drizzle with the soy sauce, and then add the almond butter, ginger, garlic, cilantro and red chili flakes. I shamelessly don’t measure spices, so just spice it to your liking. If you’re unsure, go slow until you get it where you want. Make sure you use a very generous portion of cilantro though!

Place a lid over the pan to help steam the shrimp a bit (about 5-6 minutes). Once the shrimp have been steamed some, stir fry the shrimp in with the slaw until everything is fully cooked and tender. Squeeze as much lime juice as you like onto the mixture before serving. I love lime juice, so I definitely used the entire lime.

Serve topped with more fresh cilantro and the crushed cashews. If you eat eggs, a scrambled egg would be great in this as well! Bon appetit!

The following deliveries will be on Tuesdays instead of Mondays

The following deliveries will be made on Mondays